Those who see my street photography images often ask me why cities in my images look so deserted and people are almost always alone as if there is no-one there but me and that person in the photo.

What is street photography

For me, street photography is always about exploring a person’s relationship with a city, in which the human plays the leading part and the city is like a stage setting.

The urban realm is not really as comfortable a place as it may seem, and therefore it is important for me to understand the interaction of a single person with a city, without unnecessary details and other people. What the person does, where he or she goes and looks at something, why he or she does it at all. And immediately some kind of a story comes to mind, which is similar to a small film episode. That is street photography.

The Wall and the Man 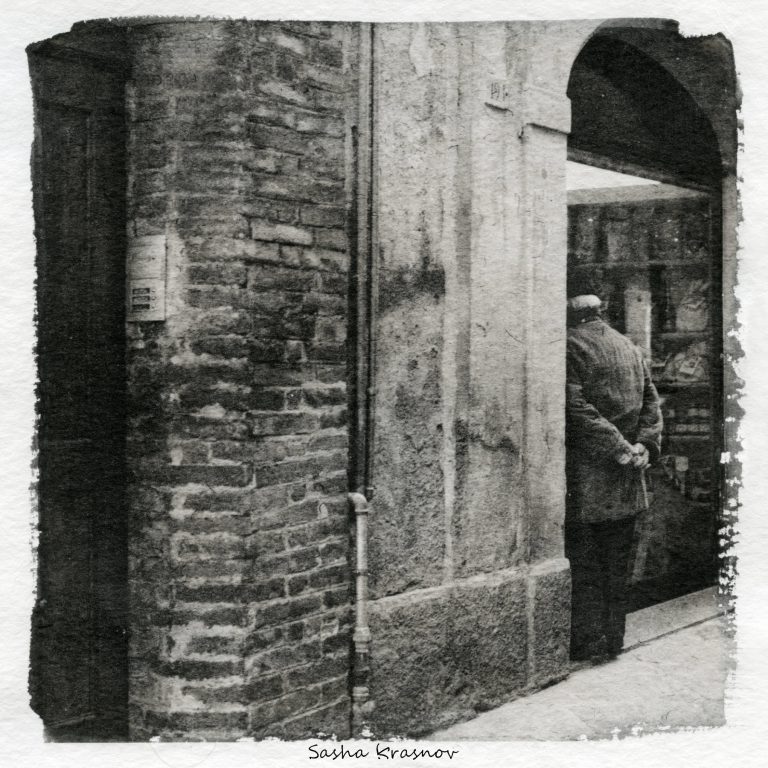 The Wall and the Man, Siena

During one of my strolls in Siena, I noticed how an old man came to the shop window and started peering into it. I was amazed as he seemed to have almost merged with the wall butted against the window.

And he stood there for so long, absorbed in his thoughts, or, maybe, just looking narrowly at something in the window, that I could not stop pondering over what object he might have been looking at. Or, maybe, this is far from being the case? 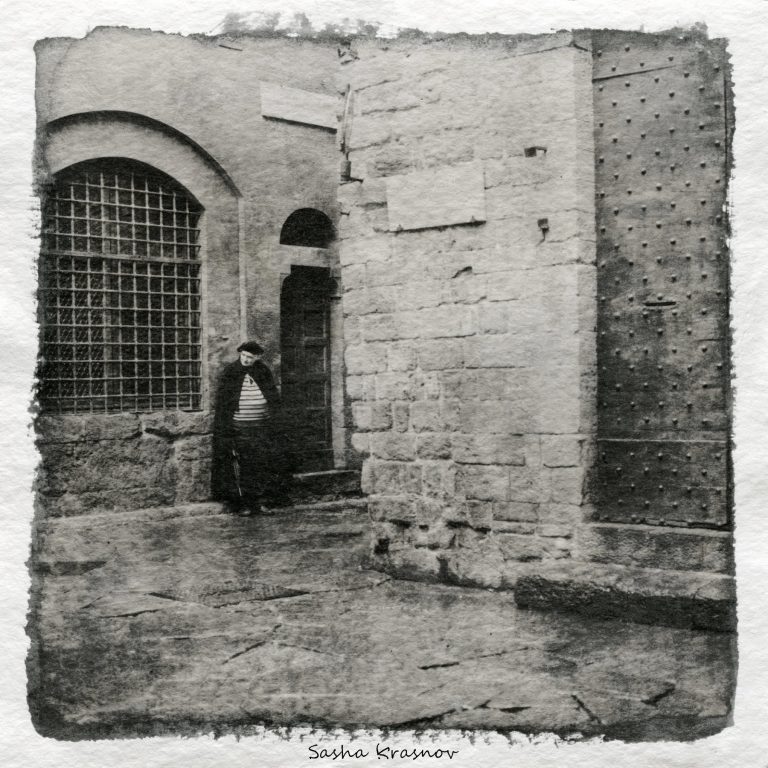 I met this strange old-fashioned man on the street of Florence. He wore an old-style cloak and carried an umbrella in his hand. He stood looking around or waiting for someone for quite a while, maybe, for half an hour or longer.

So, I had enough time to choose the right composition and the right moment to take this photo. It is in theory. In practice, he kept looking at me to check what I was doing. But the subject was quite interesting for street photography.

I stood thinking about Florence in 1920s and this man who waits for someone. He was dressed ideal for this plot. I kept waiting until that decisive moment came for releasing the shutter. 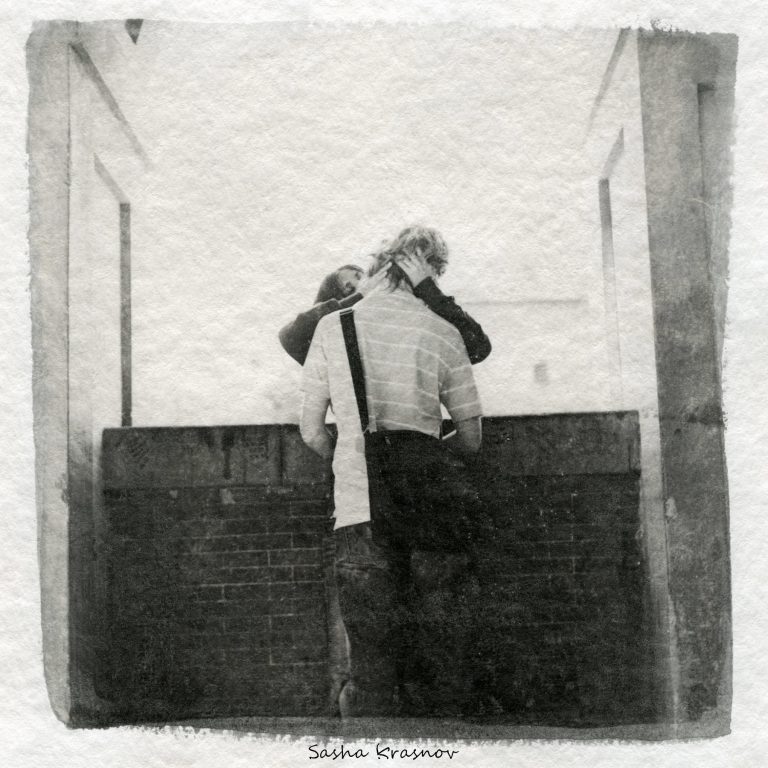 If I was asked to capture the feeling of love, I would pick this photograph of a kissing couple, which was made by chance in one of the windows on the Ponte Vecchio (“Old Bridge” in Italian) in Florence.

While examining this picture, I am always amazed at how feelings can be conveyed only by hands.

The bicycle, the hat and the coin 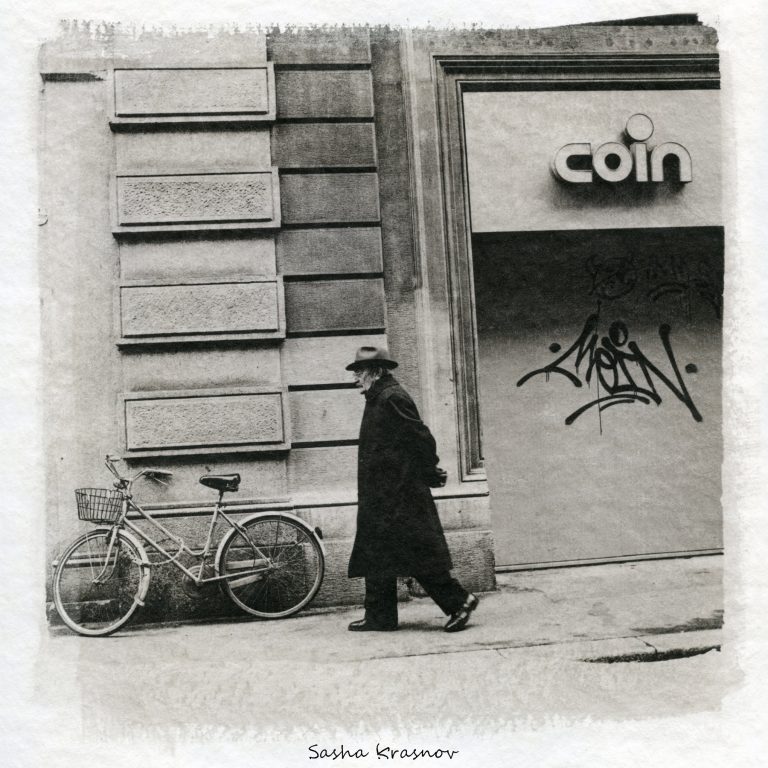 The bicycle, the old man and the coin, Bologna

I made this shot in Bologna. There is something interesting in its composition – a bicycle, an old man, and a “coin” sign. So, it contains some contradictions in the picture, like, for instance, graffiti on an old wall. 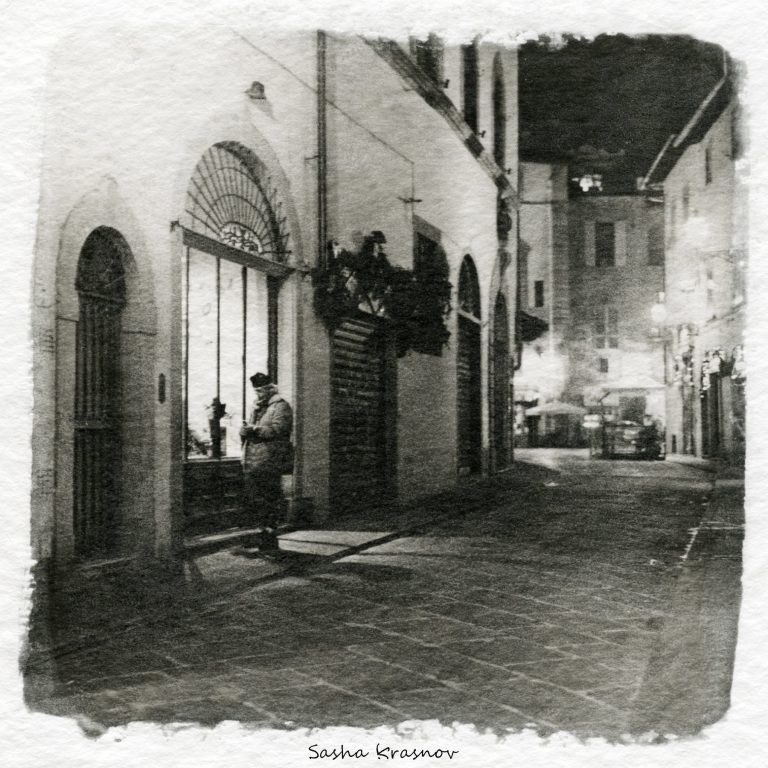 It was Christmas Eve. As for me, this man resembles Santa looking for his next delivery address or just examining a map on his smartphone. 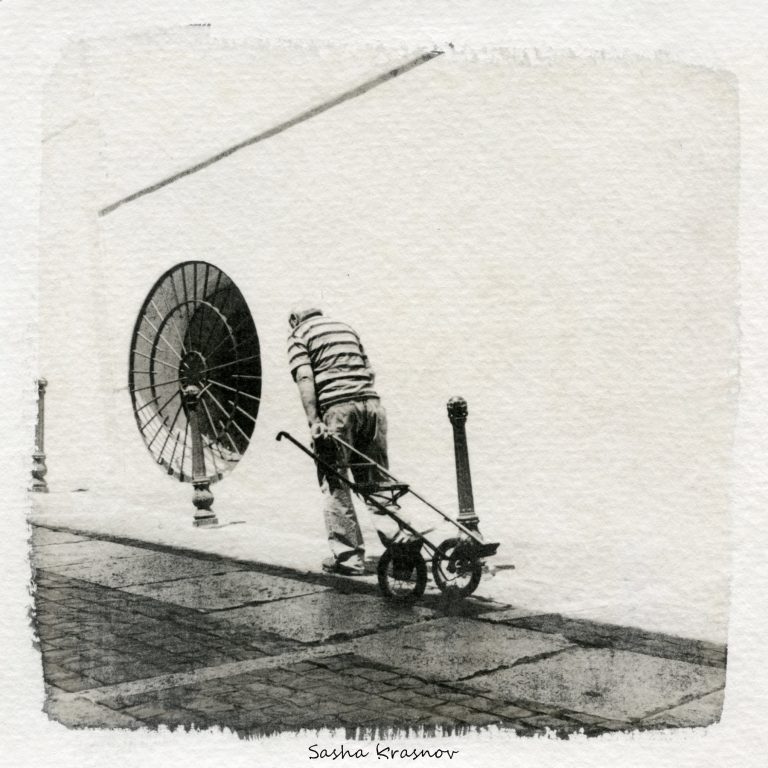 I stood for a very long time and observed the moves of this old man as he dragged this cart. And at once I thought that something could come out of this story. He moved very monotonously and consistently.

I wanted to convey this feeling, but it seemed that something was missing. And only when he came closer to a big round ventilation window in the wall, the composition seemed complete. It looked like the scaled-up wheels of his cart, creating a composite triangle that resisted this upward movement of the street. 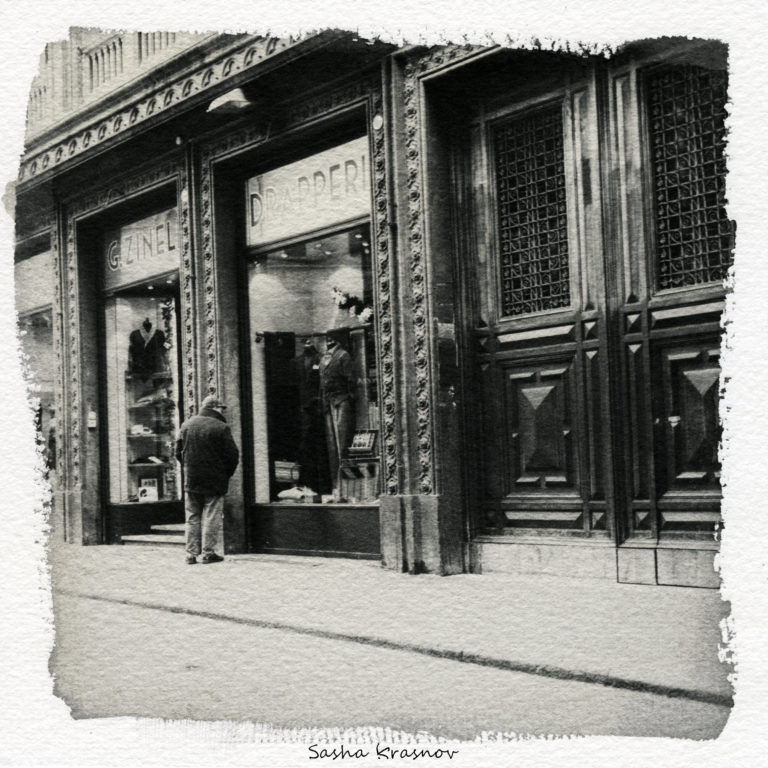 Oddly enough, but it is both a typical and symbolic plot. This store, whose shop window is viewed by a bystander — a resident of Bologna, sells very expensive items. Even its Art Deco decoration points at that. It is rather interesting to stop by and have a look but, in fact, it is meaningless, because most people cannot afford these things.

And although the entrance to the store is located on the left, it is almost invisible in the photo. But these huge doors on the right, which seem to be the entrance to the courtyard, look like a single whole with the store and impress with their massiveness, symbolizing this insurmountable barrier. 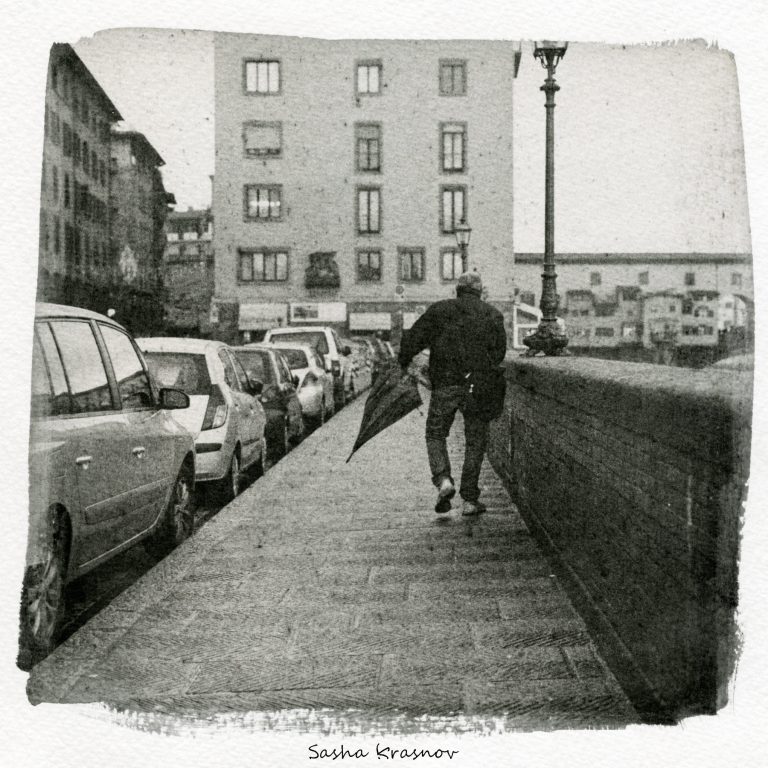 It was a rainy winter day. I was wandering around Florence in search of the house where famous Russian film director Andrei Tarkovsky lived for several years.

And going down the street and seeing the person in front of me I started brooding over the cinematic language rather than thinking about a street photography plot.

For me, this photo depicts a whole story, just like a film does, but encased in a single frame. 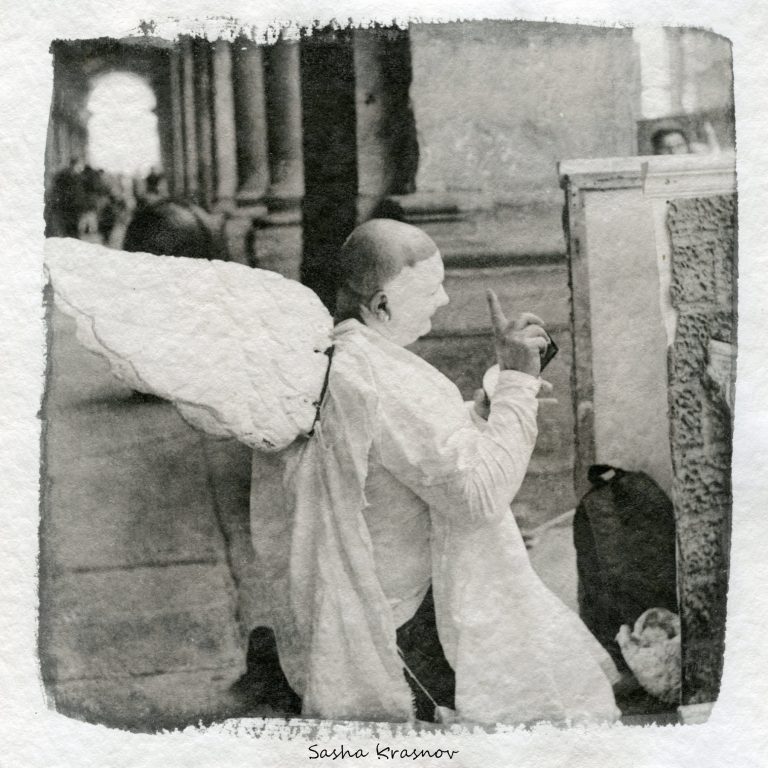 The Cupid near Uffizi, Florence

This picture shows a charming Cupid gearing up for action. However, in real life, this white-faced man is not a Cupid, but a mime. Every day he comes to work in the Uffizi Gallery’s courtyard and starts getting into his character in public.

People gathering around the mime gaze at him with interest. At times the man gets distracted by onlookers and asks them with signs to wait a bit until he completes his preparation. 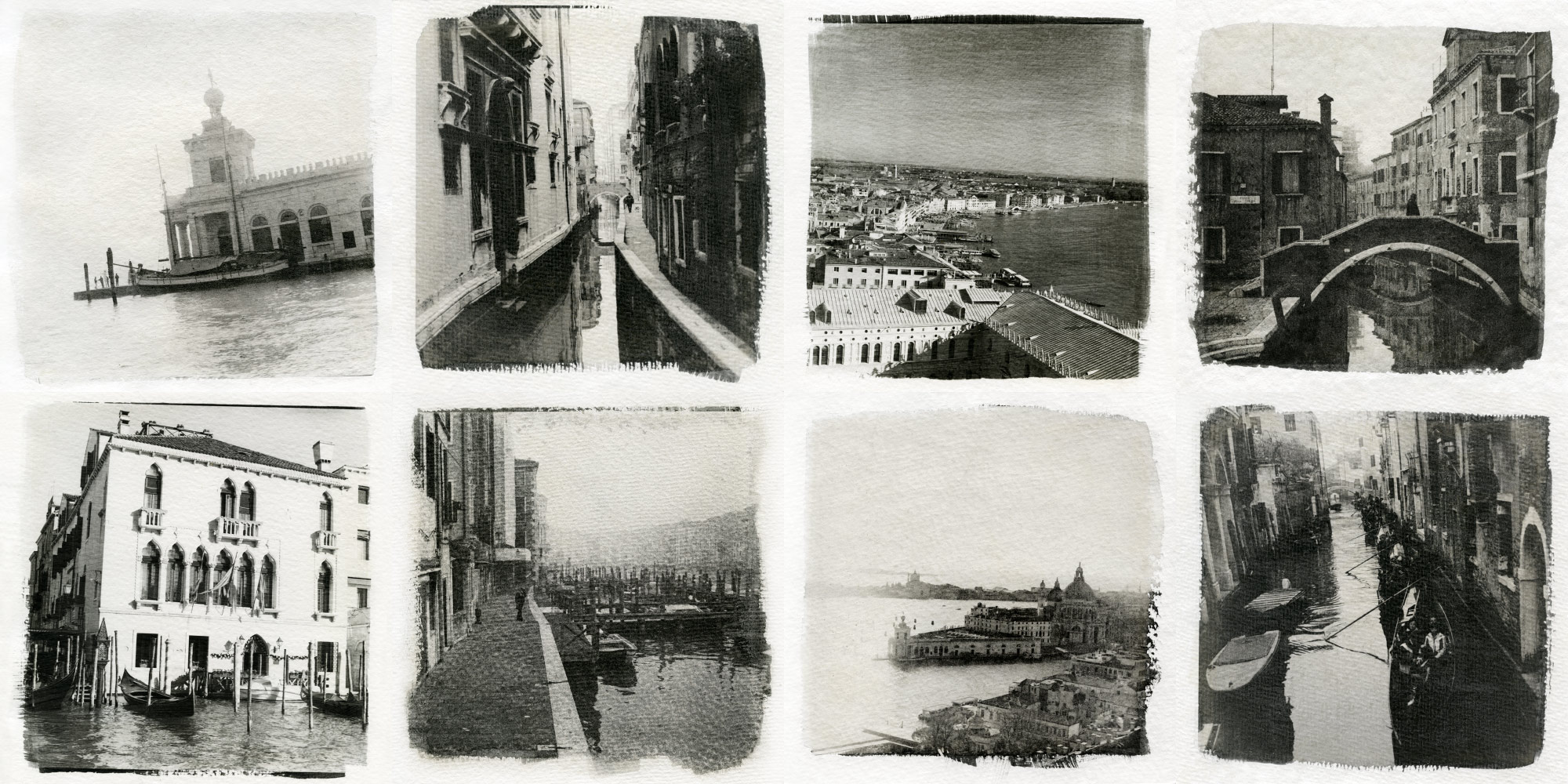 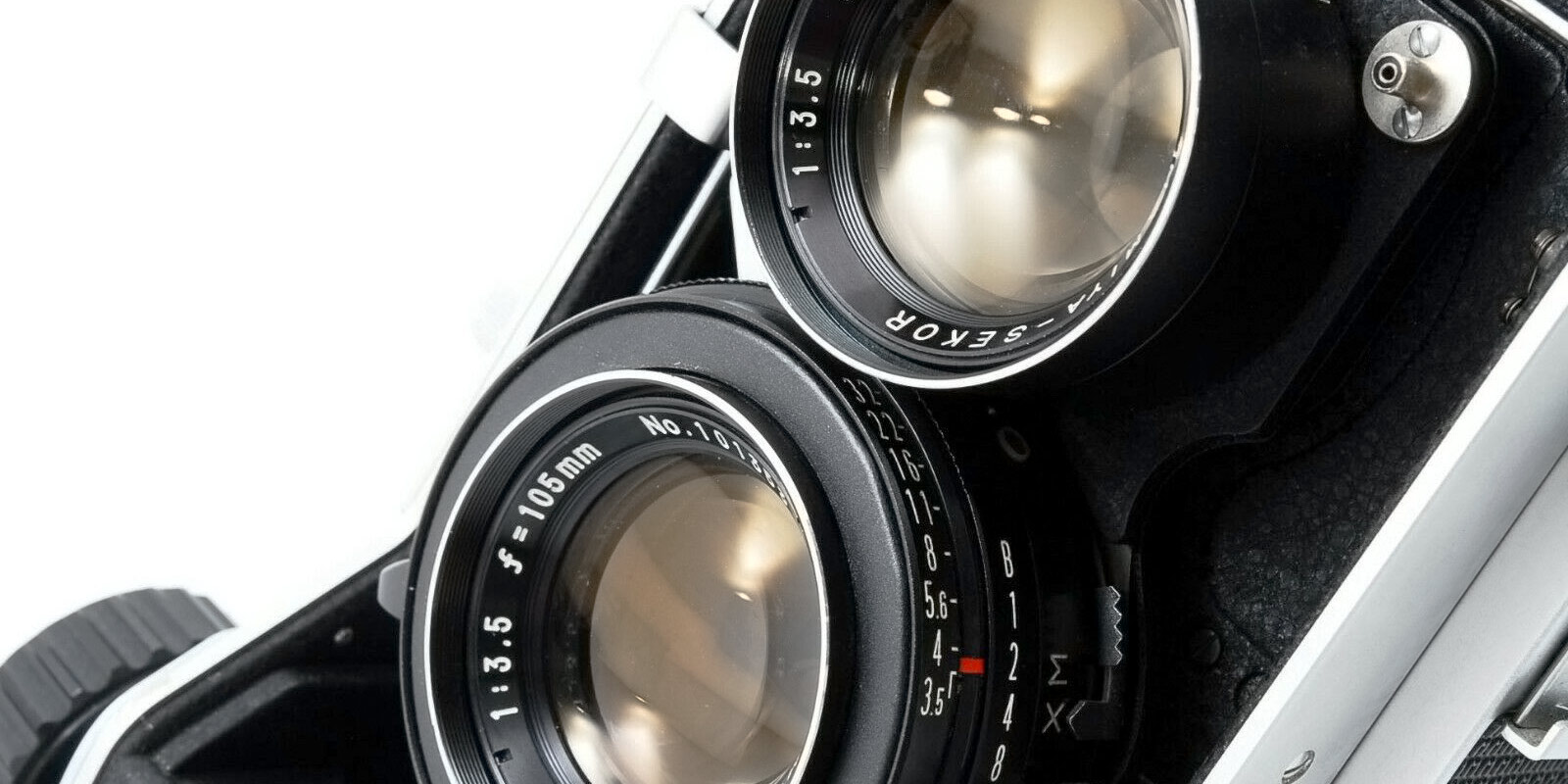 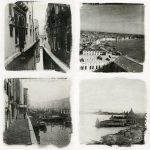 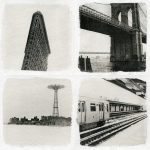