But such a universal solution — G2 bellows lens hood — has been released by Mamiya for their line-up of lenses for RB67 and RZ67 cameras. Most Mamiya lenses use a 77mm filter thread. So, it is possible to use Mamiya’s bellows lens hood with almost all Pentax 67 lenses. It is very handy because it covers 90 – 200mm focal lengths. Why not carry only one hood for all your lenses?

As I’ve already said, a majority of Mamiya RB67 & RZ67 lenses have a 77mm filter thread. The mount adapter is usually included by default with the hood for this filter size. 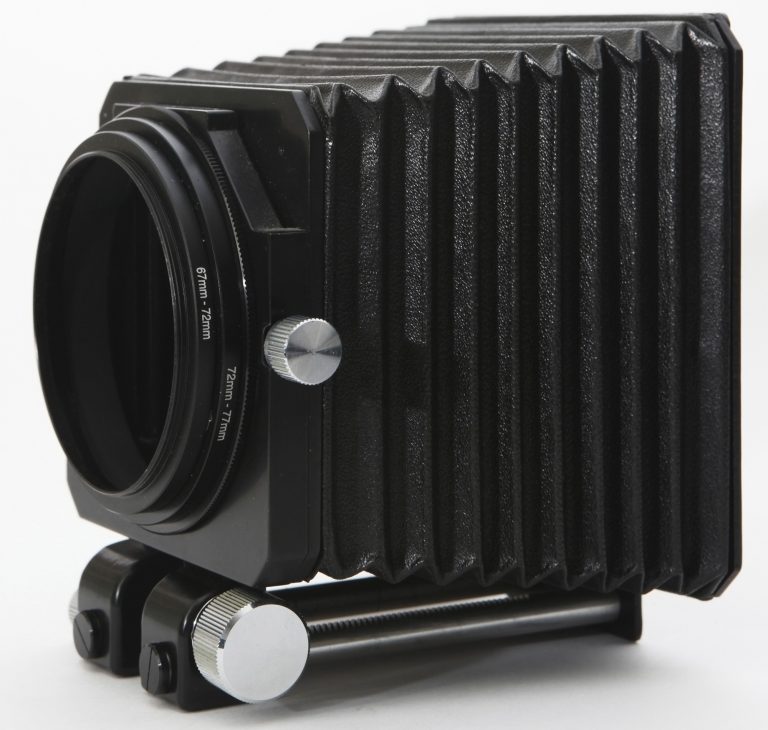 Back side of the hood

Two adapters allow me to mount the Mamiya G2 bellows hood on lenses with 67mm or 77mm filter threads. It also has a special filter slot to mount 3″ gelatin filters and a 360mm lens mask.

Thus, the hood enables me to use the same filter for all lenses and, on top of that, to apply filters not to the entire frame, but rather partially, to create special visual effects. This is another bonus from Mamiya!

By default, focal lengths on the hood rack are labeled for Mamiya lenses. These marks are made with some tolerance in regard to real lenses. This means that if the hood is set at the 127mm position and used with the f=90mm lens, it won’t vignette. Similarly, if you use the f=105mm lens and the hood set at the 127mm position, no vignetting will occur even with a filter mounted on the frontal part of the lens. 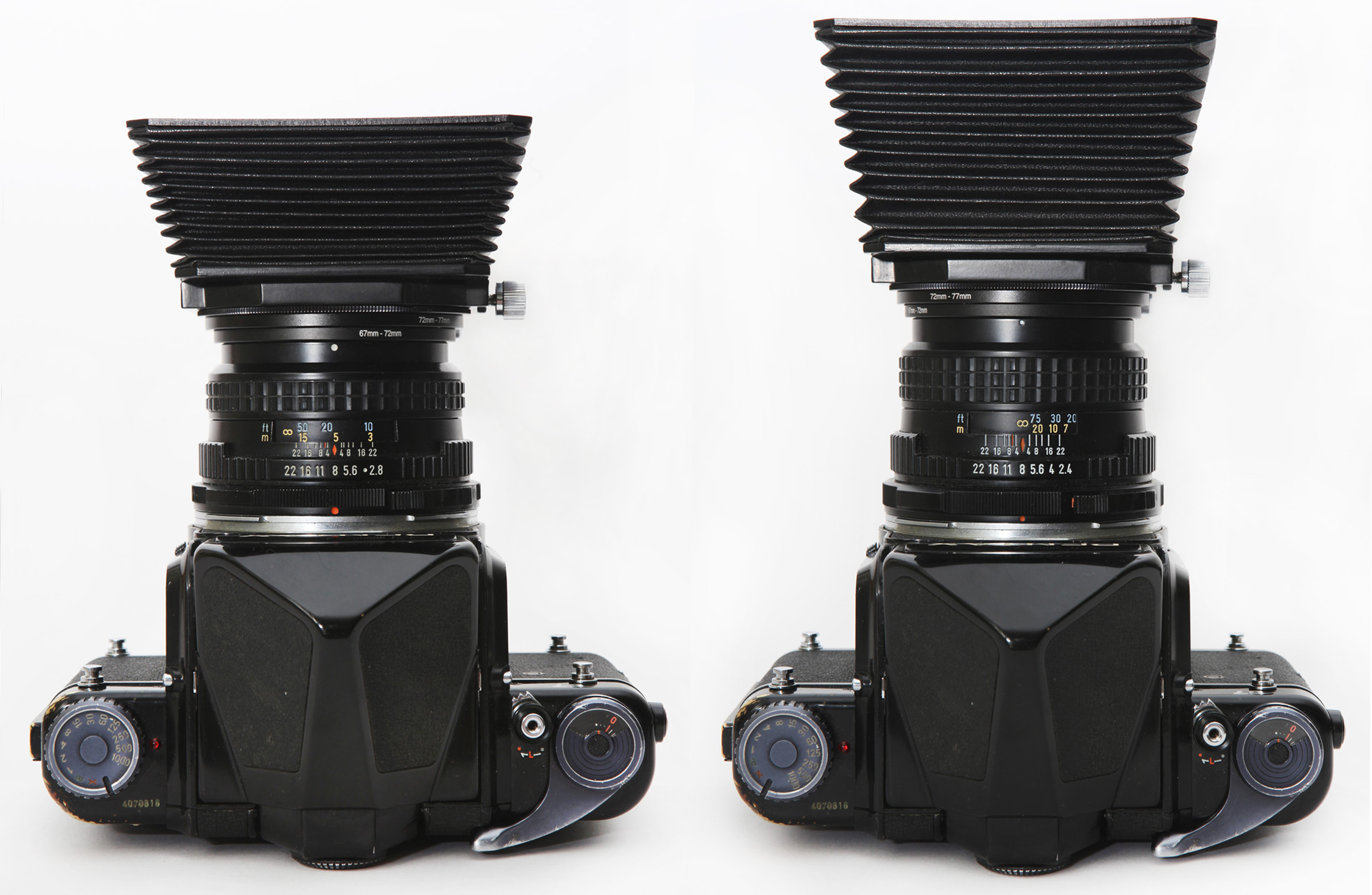 I also use the hood with 135mm F4 Macro and 165mm F2.8 too! Albeit they both have built-in hoods, sometimes a better one is still required. This is especially true for 165mm F2.8, whose hood doesn’t really prevent glare and lens flare from various light sources. A series of test shots proved that the Mamiya G2 bellows hood may be used even in the 180/250mm position with 135mm F4 Macro and in the 360mm position (no mask installed) with 165mm F2.8 wide open without vignetting. 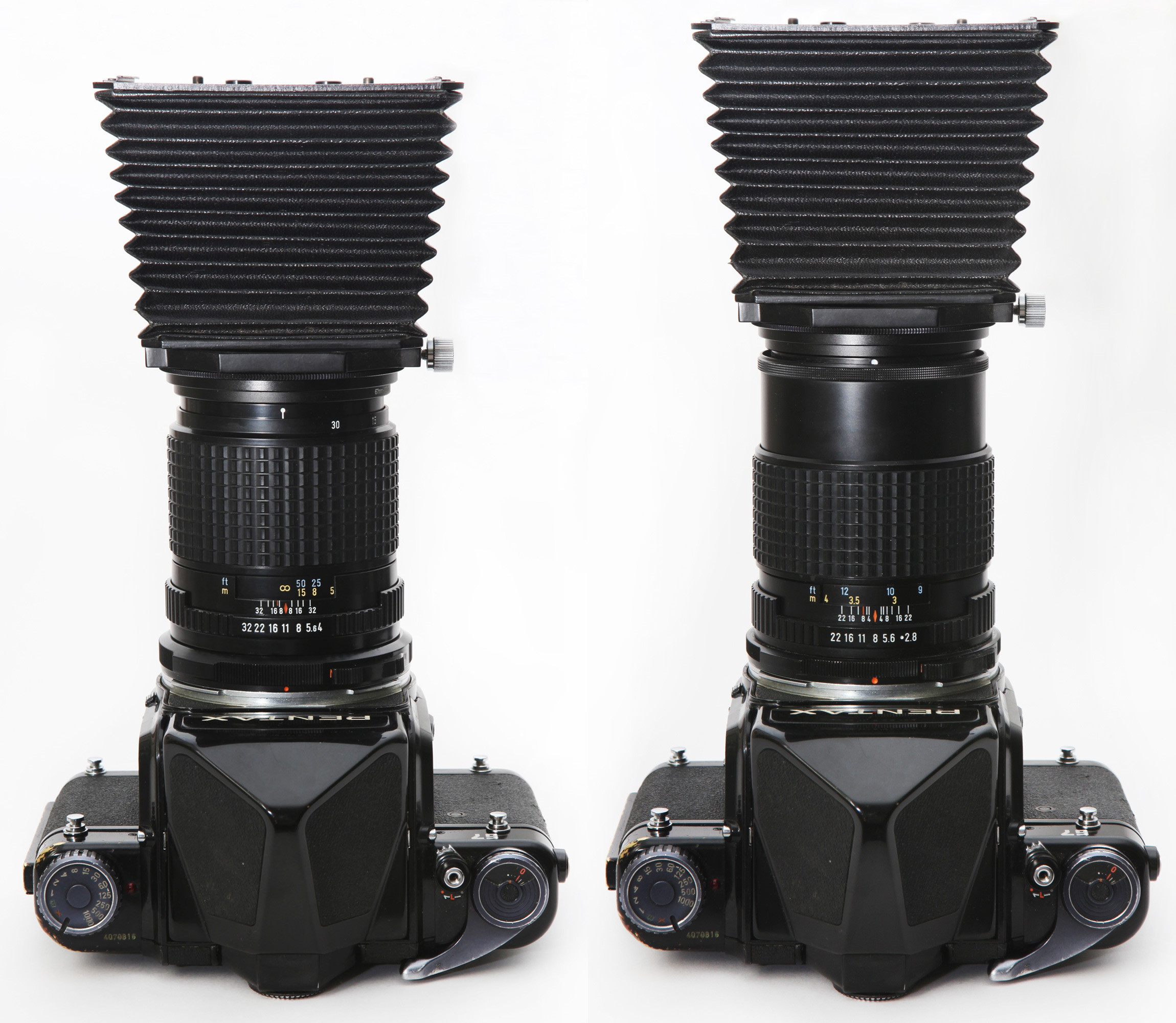 Of course, it is compatible with some other lenses with the 77mm filter thread, with no additional adapter required. These are, for instance, late 200mm F4 and 165mm F4 with a leaf shutter. According to the Mamiya manual, it is also possible to use a 65mm wide-angle lens. And I think it should work fine with any of the two 55mm F4 lenses that have the 77mm filter thread. But a series of test shots should be carried out to check if vignetting occurs or not.

Its key disadvantage is that it is somewhat bulky and not very convenient for travelers. While traveling, I prefer to take a rubber folding hood with me. But Mamiya’s hood costs much less than the total price of original Pentax hoods for each lens.