I am often asked why I don’t do a review of a Takumar 6X7 90mm 2.8 lens with a leaf shutter (LS) and compare it to a late 90mm F2.8 lens, which replaced the former. However, frankly speaking, I don’t see much point in this for several reasons. The mere fact that Pentax decided against updating this version of the lens means that it was either in little demand or that it had poor optical performance, as a result of which they replaced it with a new 90mm F2.8 lens, which has excellent optical performance and usability.

I also would like to note that I make reviews of only those lenses which I either possess, had in the past or have tried to shoot with. If it becomes possible for me to try it for a couple of days, I will necessarily update this article, turning it into a full-fledged review.

However, the 90mm F2.8 LS is still impossible to replace when high-speed flash sync is required due to specific lighting conditions or for other reasons. It allows flash sync with a range of shutter speeds starting from 1/30 sec and up to 1/500 sec — instead of only 1/30 sec on all Pentax 6X7, 67, 67II bodies. The built-in leaf shutter of the lens can be deactivated, turning it into an ordinary lens.

There are three shooting modes available with this lens.

The lens can be used as a regular 90mm lens if the lens shutter is not cocked. In this mode settings of the leaf shutter speed ring and “U/S” lever do not matter. 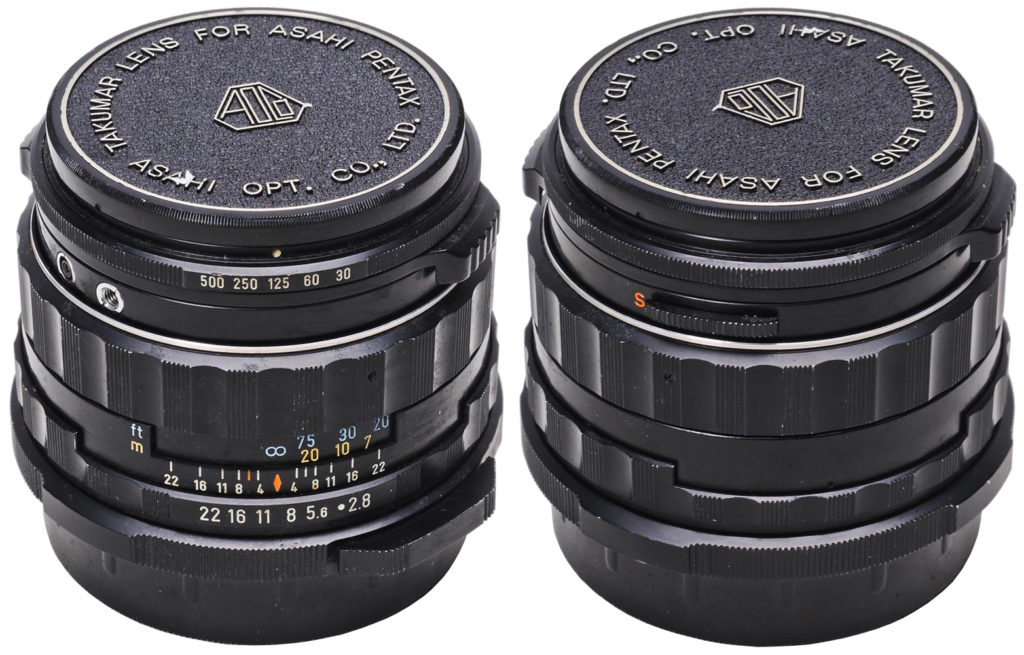 This mode allows using high-speed flash sync with a shutter speed ranging between 1/30 ~ 1/500 sec. When shooting in this mode, “U/S” lever on the lens should be set to the “U” position for “Usual” mode and the camera’s shutter speed dial to 1/8 sec or less while the leaf shutter dial – to the desired speed. Next, the leaf shutter needs to be cocked and an X-sync cable connected to the flash terminal of the lens for high-speed sync. It is crucial to cock the leaf shutter before each shot. Otherwise, only the camera shutter will be fired, probably at 1/8 sec or slower, depending on your camera’s settings, and the lens will function as an ordinary lens. Watch this video to see how actually leaf shutter works on this lens.

This mode allows you to expose the same frame multiple times. For shooting in this mode the “U/S” lever on the lens should be set to the “S” position for “Special”. Also, the camera shutter speed dial needs to be set to the special “Time” exposure mode — between 1/1000 sec and X — and the leaf shutter speed dial should be set to the desired speed. The next step is to cock the leaf shutter and connect a cable release to the lens release socket. Pressing the shutter-release button on the camera leaves its shutter open and fires the leaf shutter of the lens for the first time. Now it is possible to use the cable release connected to the lens to take multiple exposures without advancing the film by cocking the leaf shutter and releasing it with the cable release. The cocking/releasing procedure may be repeated as many times as required. Turning the camera shutter speed dial back to 1/1000 or X closes the camera’s shutter and ends multiple exposures for this frame.

It is also necessary to note that 90mm F2.8 LS is the only lens which makes multi-exposure possible on all revisions of Pentax 6X7/67 cameras. Only Pentax 67II camera has multi-exposure feature built-in. 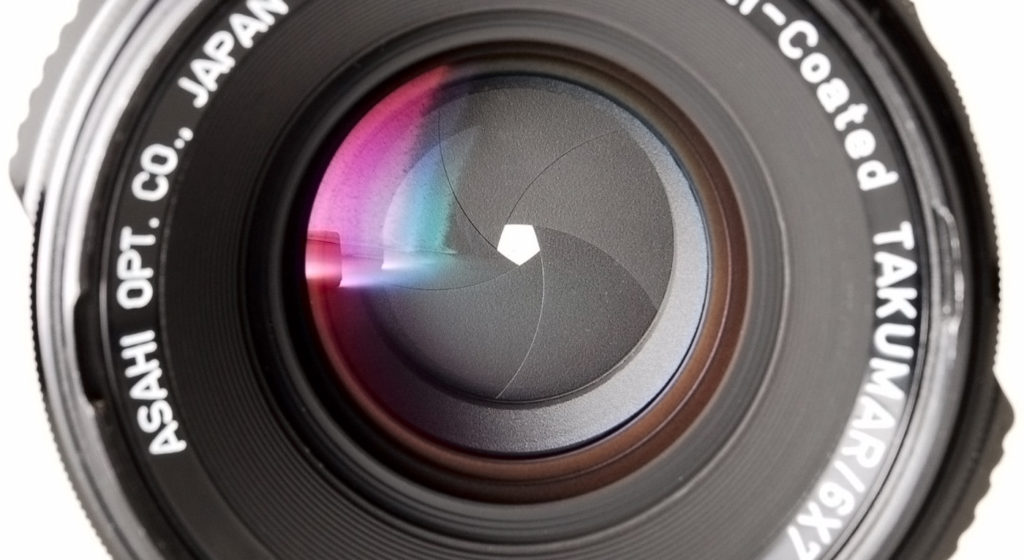 The lens has 5-blade aperture

This lens is widely known for its softness, which is slightly noticeable even in the viewfinder as distinct from normal primes. Another drawback may be that its leaf shutter is not ill-designed and therefore slightly overexpose on some lenses. But it depends on the previous use of the leaf shutter.

One should also not forget that it is quite inconvenient to shoot in the multiple exposure mode because the mirror will be in the lifted position and cover the viewfinder completely, which will result in framing being done blindly. Despite the fact that this lens is the only one to make multiple exposures possible on Pentax 6X7/67, it will be quite hard to use this function. 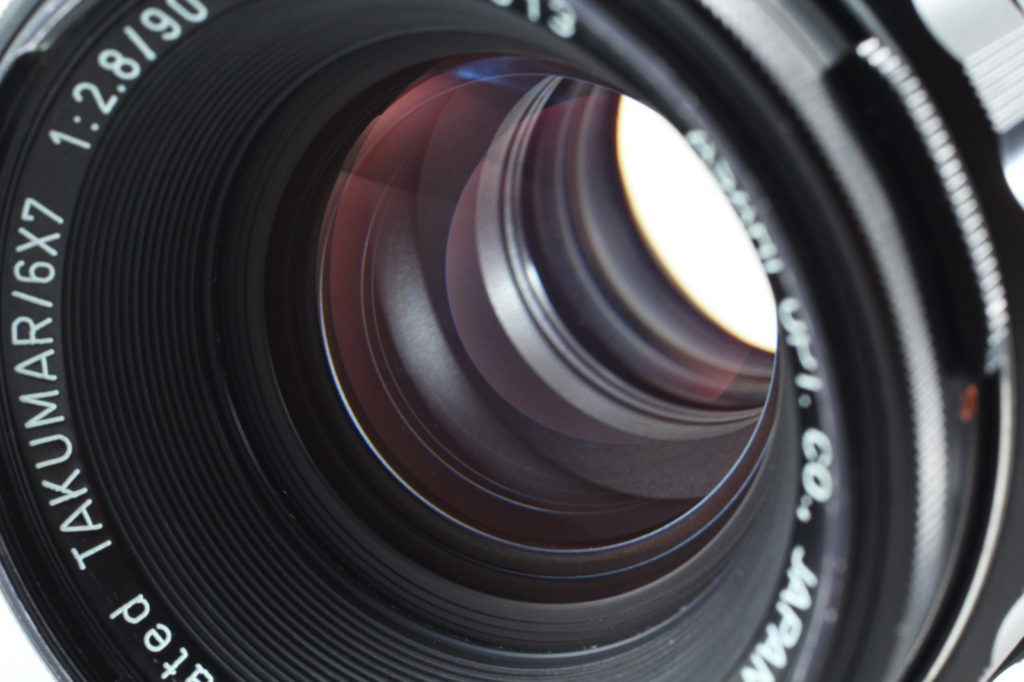 The frontal element of the lens is deeply recessed. It is a good option and should have a positive impact on preventing the lens flare without a hood. Anyway, it is better to use the hood, for instance, an old screw-in type metal hood labeled “Takumar 6X7 1:2.8 90mm” or modern plastic clip-on PH-SB 67mm hood.

I am not a big fan of multi-exposure photography and have no idea when it could be needed. Also, I shoot using flashlights mostly in a studio where I can control the light, and high-speed flash sync is not an option for me. Thus, it only makes sense to buy this lens if you really need flash sync with shutter speeds faster than 1/30 sec or you often shoot multi-exposure images. But in this case, you’d better take a closer look at Pentax 67II, which is much more pricey. 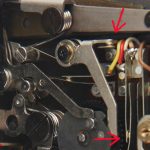 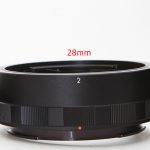