Kodak D-76 is a classic and truly versatile developer which first entered the market in 1927. It provides full emulsion speed, long density range and excellent shadow detail with normal contrast and produces fine grain with a variety of continuous-tone black-and-white films.

Kodak recommends using D-76 as a full-strength stock solution. But there is no reason to use it undiluted. For greater sharpness, but with a slight increase of grain, a 1+1 dilution is typically used, which is also recommended by Kodak. It gives a long density range and allows push processing with relatively low fog. 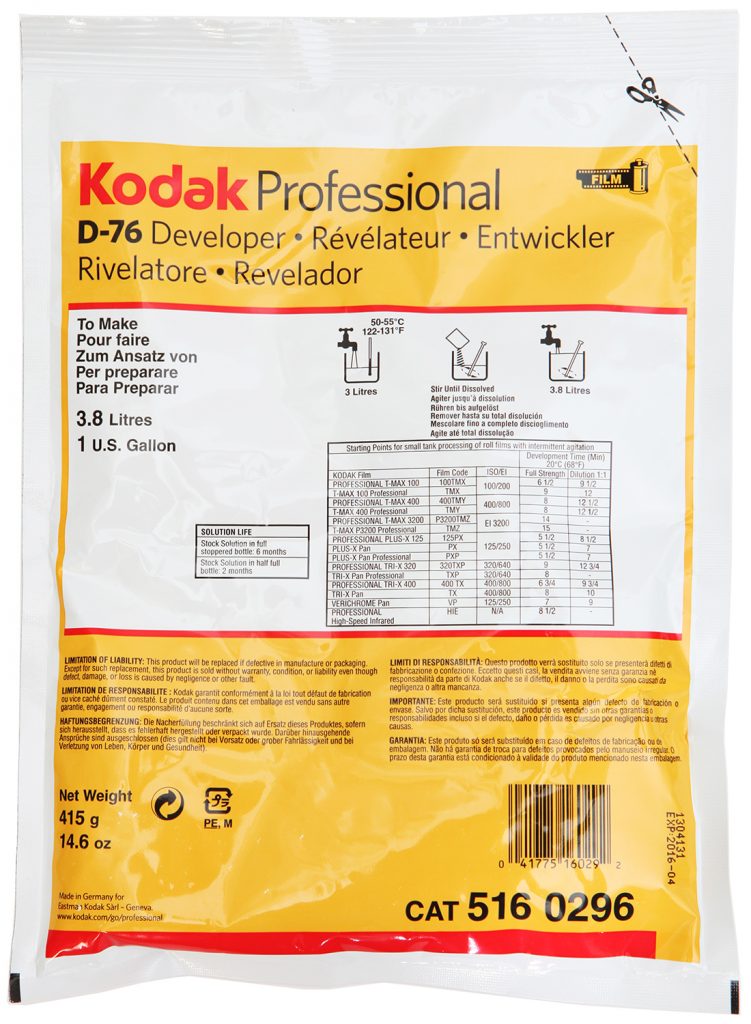 If it is diluted to 1+3 it becomes a non-solvent high acutance developer. Non-solvent developers produce a coarser grain structure but the image will look sharper. It is because there are not many solvents with such dilution to dissolve the edge of the grain.

Fresh solution should be prepared just before developing from certain parts of stock and water. However, I personally recommend diluting it 1+3 for a better compensating effect. Once Kodak included charts for this dilution. But a few years ago they were removed from its official data. For normal processing of low contrast scenes I usually use it diluted 1+1.

Pull and push processing with D-76

The key to stable results is strict compliance with the same rules every time you develop the film. Do not modify temperature and agitation until you get stable results with a certain dilution. If you need more or less film density, first try to increase or decrease developing time. If it doesn’t help, other dilution may be used. But the more diluted the solution gets, the lower the contrast becomes, and vice versa.

By the way, any dilution other than stock can be used only once. This is very convenient. As a result, you always get the fresh solution just before developing and you do not need to put the used one back into a separate bottle after the process is over and calculate the developing time for the next film, which is absolutely unpredictable. This is another key to stable results.

The times in this chart are given for the temperature of 20°C with no pre-soaking and the following agitation: 2 inversions of tank or film reel rotation for 4 sec per every 30 sec. To remove air bubbles from the film I tap the tank a few times immediately after the developer is poured inside. I have been using the sealed Jobo UniTank 1500 tank system for many years.

And, of course, this chart reflects my own experience. Also you may refer to the Massive Dev Chart for other films and times.

Kodak published the formula of D-76 developer in some of its photographic handbooks, for example on page 15 in Kodak Chemicals and Formulae. Below is the original formula of Kodak D-76 film developer for preparing 1 litre of stock solution.

However, using Kodak D-76 for stand development is possible and I personally tried it. I used a 1+7 dilution, which is a highly dilute developing solution: just 60ml of the stock is used to prepare 480ml of working solution for my Jobo UniTank 1500. Probably, it is possible to use an even weaker solution, however, it must be noted that there is a limit as regards the minimum amount, which practically depends on the film emulsion. I guess if the dilution ratio is more than 1+7 a real film speed will be hard to achieve.

The initial temperature of the solution should also be kept at 20°C, although in this development method it won’t be decisive. But, I prefer the initial conditions for the development to always be the same. The average development time is 1 hour. It can also vary depending on the background temperature but one hour usually should be enough. I always use my standard agitation: 2 inversions of tank (or film reel rotation for 4 sec) per every 30 sec, but only for the first two minutes. Further agitation is not carried out.

It is important to note that in the stand development method I always develop only one film at a time, despite the fact that my Jobo Unitank 1520 allows me to develop two 120 or 135 films simultaneously.

The stand development creates many opportunities for one’s own experiments, and one could write a separate article about it. For example, if negative images have insufficient density, you can try semi-stand development or agitation for every 15th or even 10th minute. It’s up to you.

I prefer to get a stable result. So, I use stand development mainly as an experiment. Unfortunately, my experience also showed that not all films are suitable for stand development with Kodak D-76. In particular, when it comes to Foma films, probably gas bubbles appear on the emulsion surface during the stand development, which leads to insufficient development in these areas. When scanning, this effect appears as a myriad of small black dots throughout the film. I did not observe this phenomenon on Kodak T-Max 100 films though. However, Foma seems to be improving its emulsion from time to time, so it is quite possible that the situation has changed. 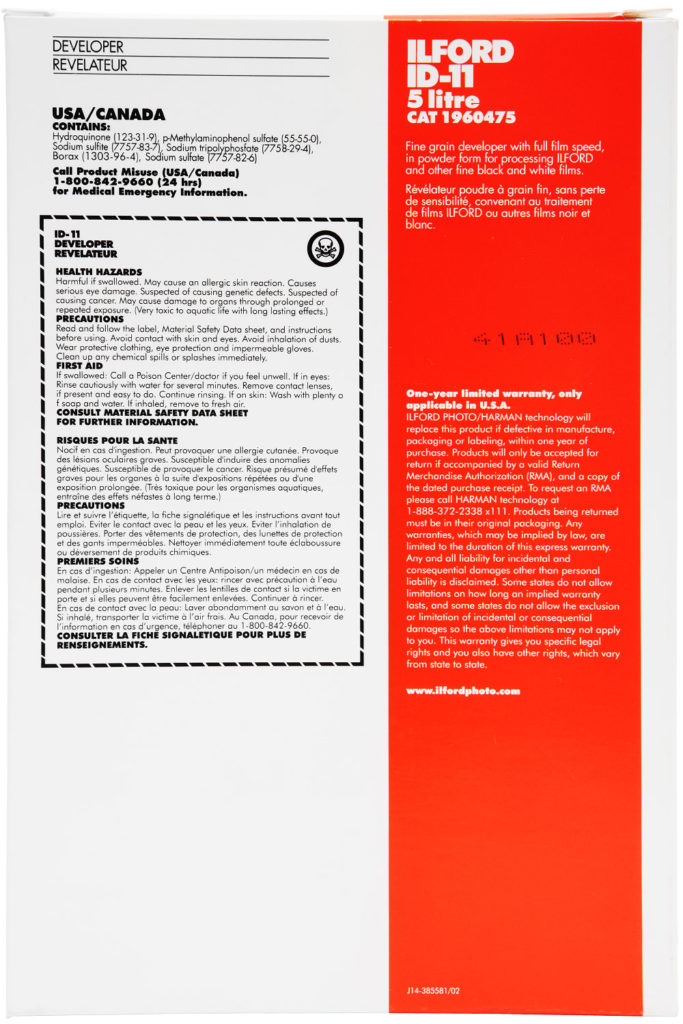 Ilford ID-11 film developer is equivalent to Kodak D-76. It is clear from the Ilford ID-11 formula, which was published on page 14 in Ilford Formulae & Packed chemicals photographic book.

Unlike Kodak D-76, which is sold as a single package, Ilford ID-11 involves two separate packages that need to be added and mixed one after the other. Probably this is exactly what gives rise to questions whether modern Kodak D-76 and Ilford ID-11 are really identical.

There is an assumption that the difference was in the chemical that maintains pH, and perhaps their modern formulas are somewhat different. But, it’s not so important to me as I use both these developers and have not noticed any difference. Even if it exists, it will be offset with a 1+1 dilution, and even more so with 1+3 and 1+5.

Kodak says that the storage life of D-76 stock solution in a tightly sealed full bottle is 6 months and 2 months for half-filled. I pour the freshly prepared stock solution into several Jobo 1-litre black bottles, and use them one by one, which increases the shelf life of the developer.

In practice, the stock solution can be stored in a black tightly closed full bottle for much longer than Kodak claims. For instance, I once forgot about the last full bottle of the Kodak developer because I switched to developing in Rodinal. And I had it in this state, without access of oxygen, standing for about two years! The developer itself turned yellowish, but its properties almost did not change. Unlike Kodak XTOL, which does not change color during its storage but can completely lose its properties. I can with a certain degree of confidence speak about its preservation based on the color of D-76 solution — it is better not to use it if it turned brown or very yellow.

Another good way to always have some fresh developer is to prepare it yourself in the amount that can be used within 2-3 months. which depends on the number of films you shoot. I rarely mix it myself, but I usually use the prepackaged Kodak D-76 developer to prepare 3.8 litres of stock solution, which I use up within a year, while simultaneously using Rodinal. During this period the properties of D-76 don’t usually change for worse.

A good database listing recommended developing times is the famous Massive Dev Chart. You may use it as a starting point in your own experiments with film developing.